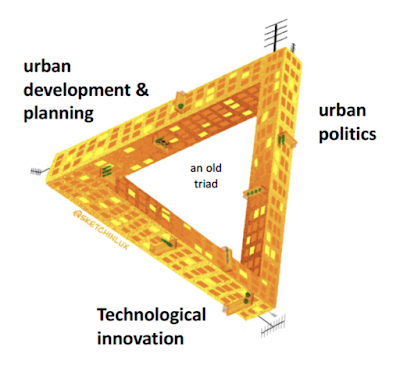 Comparing smart city development in Toronto versus that in Barcelona is such a great comparison. There is so much to explore, address and discuss concerning scale (of corporate size, of financial power, of targeted technological reach), centralization versus fragmentation, knowledge differentials across institutions in charge of urban development, and the visible/hidden agendas of those in charge. Fascinating directions at the nexus of an old triad urbanplanning, urbanpolitics and techinnovation. If you missed it, it can be found at the University of Stavanger YouTube channel for smart cities (see below).

Abstract for Ramon Ribera Fumaz's Commoning the ‘Smart City’ in Barcelona
There is a well-established consensus amongst critical scholars, activists, and, increasingly by the general public, that the Smart City practices are generating a new spatial fix for (tech) capital and depoliticise urban redevelopment and environmental management. Against this backdrop, Barcelona has attempted in the last years to harness digital platform technologies to enhance participative democracy and its agenda to secure technological sovereignty and digital rights for its citizens. In doing so, it has aimed to build a tech ecosystem that does not respond to corporate digital capitalism needs. This strategy's central tool has been the multi-purpose platform Decidim, built on FOSS and transparent and inclusive ethical principles. This paper explores the Decidim ecosystem – the network of developers, research centres, maintainers, advocates and activists, and city administrators – in Barcelona and beyond to establish the long term connections, the affordance and limitations of such initiative concerning its replication and scalability elsewhere. Thus, reflecting on its potential in challenging mainstream strategies.
Abstract for Carr's Alphabet (Google) in Toronto – Technocratic joint ventures of politics and large digital corporations (LDC)
The arrival of large digital corporations (LDCs) on the urban development scene is a relatively recent phenomenon, which has sparked concerns around data privacy, surveillance, and the implications of new technologies shaping supposedly smart urbanity. In this entry, I will present research that examined what happens when an LDC entered the field of urban development. Specifically, the empirical focus was on Alphabet Inc.'s failed digital city plans for Toronto’s waterfront. It is clear that the arrival of LDCs hardly signifies the sole and simple arrival of new palates of technologies. Rather, LDCs are new players in the field endorsing post-political modes of urban development.