Job Advertisement: Two PhD positions at the ETH - A message from David Kaufmann

Dear colleagues,
I am searching two PhD students for the newly established research group in “Spatial Development and Urban Policy” at ETH Zürich, Institute for Spatial and Landscape Development. The research group and both PhD students will work at the intersection of public policy, urban politics, and spatial planning.

Applications are considered until September 1, 2019. Please share these job ads in your networks and with suitable candidates. Contact me if you need more information.

The IGU Urban commission meeting in Luxembourg was a huge success! 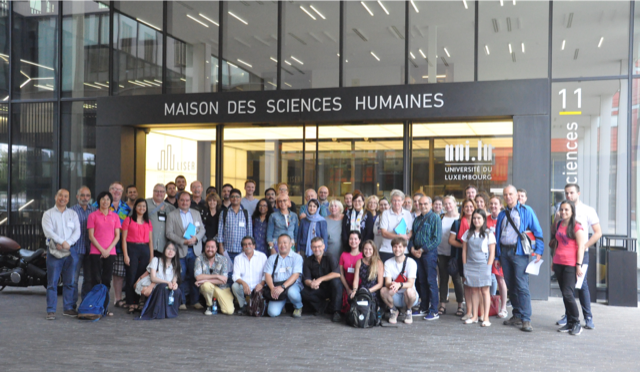 The IGU Urban commission meeting in Luxembourg was a huge success! Thank you to all the participants for a great conference. All extended abstracts of the presented communications are available here.
No comments:

It matters how smart cites are governed

A longer German version of this blog post, "Smart Cities: Selbstzweck oder sum Wohl der Städte?" was published in the Tageblatt, August 2019. It is available here.

In recent years, the idea of a smart city has captured imaginations with many believing that the future city is upon us with politicians, business leaders and the wider public all excited about what the future city will look like and who will have the best. This has also ignited a certain race for innovation, with the speed of development reaching such a velocity that the tech industry's appetite for more and more R&D, associated qualified labour flows, and necessary infrastructure seems insatiable. This narrative has also fuelled digitalization as a key urban development policy around the world. Luxembourg is no exception here, and aiming for a leading position in digital development.

Yet, there is more at stake than simply catering to the needs of the tech industry, because a truly smart digital revolution would also demand investment into areas that have nothing to do with digitalization skills, programming, or coding per se. For some, one key is to understand if the latest innovations can be suitably translated or properly applied to the fleshy, analogue world. For others, it is necessary to understand the psychological interface between humans and technology. These are necessary avenues of research, but what is equally vital to understand is how people are treated, how decision-making is organized, how information is shared, and how wealth is distributed. This sociopolitical awareness is not part of the standard computer science degree program but is nevertheless a fundamental component of the smart city future. In short: Society matters.

This is not new, as the shadow sides of the tech industry's impact on cities is already well documented. Silicon Valley is known as the city of angry people, as exploding housing prices continue to exacerbate homelessness or sustain long, arduous, commuter flows, and no one does anything about it. Seattle is confronted with Amazon's headquarters that ignited a rash change in population demographics and associated challenges. And, there is more and more evidence from China that their digital revolution represents a consolidation of state power and new structures of social stratification. See Karvonen et al.'s Inside Smart Cities – Place, Politics and Urban Innovation for an overview of the latest research on these issues.

A good example of what happens when urban digitalization is taken on by big tech in particular, is the Quayside development in Toronto. In 2017, Waterfront Toronto, a governmental agency in charge of land use along the city's lakeside held a competition to develop 12 hectares of land. The winner was Sidewalk Labs, daughter of Alphabet Inc. and sister to Google LLC, who declared that they would build the world's ultimate smart city.

Yet, the hype and fancy drawings didn't dazzle everyone. In an earlier blog post, we listed some of these critical voices who are raising serious concern. In addition to those, since then The Canadian Civil Liberties Association has again filed a lawsuit against Waterfront Toronto and all three levels of government on the grounds that the agreements with Sidewalk Lab on issues of data governance are neither in the public's interest nor constitutional. Roger McNamee, Silicon Valley venture capitalist, wrote an open letter to Toronto City Hall:

"Google's goal is to increase efficiency by converting all human experience into data, using that data to make behavioral predictions that it can sell to marketers, and then using its algorithms to nudge human behavior in directions that favour its business."

And, together with Prof. Shoshana Zuboff, author of The Age of Surveillance Capitalism, together with McNamee and Balsillie (founder of Blackberry), McNamee also testified before the Canadian Standing Committee on Access to Information, Privacy and Ethics and the International Grand Committee on Big Data Privacy and Democracy advising them against their business model. Watch some of it here.

And, a wide social movement has formed, #BlockSidewalk, involving urban planners, techies, business leaders, land developers, and politicians and residents with full intention to stop the project all together.

Sidewalk's primary response to the criticism has been to dominate public discourse. First, it was silent, ignoring the outcry. Then, it published a 1500-page 'draft' plan, that will take months or years for the public to figure out.

Clearly digitalization of urban space can be a Trojan Horse. However, it can also bring about positive change. While still confronting its own challenges, Barcelona is a leading example here. Barcelona's smart city strategy began agenda of economic development and growth. And, it was designed to favour a handful of chosen corporations. A change in government with a different set of values, however, redirected this strategy to one of citizen control, digital empowerment and technological sovereignty. Local problems were examined, debated, and digital solutions were tried out that would improve the urban life and not just business development.

The story of Barcelona is important for several reasons. First, it confirms that the applications of the smart city are case specific. Second, it reveals that there are positive outcomes of digitalization, when appropriate governance frameworks are put in place. Three, governing structures and values matter and make a difference. Issues of fairness, equity, sharing, and participation can be built into the smart city design.

Here in Luxembourg, the Ministry of Economics is pursuing the vision of intelligent digital specialization, and the capital city has been presenting itself as the Smart City stage for some time now. What kind of smart city will be produced here? Who will it benefit? Will it improve life for everyone or just a few? What resources will be drained and who will profit?


There are win-win scenarios to be had. Digitalization can be applied effectively. The clues are the relationships between socio-institutional and technical domains. The savy, and smart, digital city would take this into account.

* Constance is currently a Visiting Scholar at the CITY Institute, York University, in Toronto , where she is researching the Quayside development on Toronto's Waterfront. Find a research summary here.)

** For a urban scholar's perspective on the Human Scale, see previous blog post

The Tageblatt showcases six articles from the Urban Studies Group

In the context of the International Geographical Union Urban Commission that held its annual event in Luxembourg, 2019, the Tageblatt published a series of articles written by members of the Urban Studies Group of the Institute of Geography and Spatial Planning.

Find links to the articles (in German), offered by Tageblatt Premium as follows: