"Urbanisation, crisis and resilience: the multiple dimensions of urban transformation in Beirut, Lebanon" 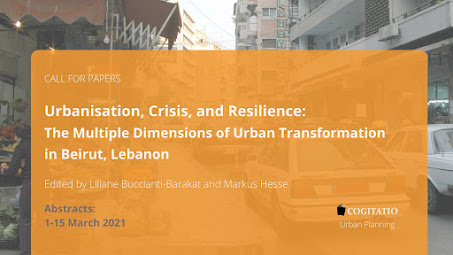 Beirut’s urban transformation is a subject of significant multi-disciplinary inquiry in the social sciences. Long considered as a crossroads between Asia, Africa and Europe, owing to its strategic location, Beirut gained prominence as a Levantine city in the mid-19th century. Since its independence (1943), the modern state finds itself subject to myriad external pressures which often have destabilising internal effects. The city’s traditional role as a maritime and commercial entrepôt and university city was widened to become a nascent financial centre in 1956 with the introduction of banking secrecy laws. Its subsequent international reputation as a diplomatic hub and tourist resort with various monikers such as the Switzerland or Paris of the Middle East coincided uneasily with growing geopolitical and migratory pressure flowing from the expulsion of Palestinians by Israel, and ended abruptly with the outbreak of civil war in 1975.
Periods of post-war reconstruction are the backdrop for new socio-economic and political dynamics. Reconstruction after the civil war had only limited success in achieving its ostensible aim of restoring the city’s former international status. Alongside the rise of centralised market-led urbanism, laissez-faire urban planning, the embedding of sectarian polarisation and neglect of basic infrastructure are all factors that raise questions about the model of urban regeneration implemented and arouse new socio-political tensions. Post-modern redevelopment of the inner-city as a site for speculative real-estate investment occurs alongside an intensive, unplanned urbanisation along the coastlines to the north and south, and in stark contrast to the ‘misery belt’ of informal sprawl on the periphery of the city.
Recent crises not only comprise a long-standing concern about the state’s economic failure and clientelist political environment but were exacerbated by the outbreak of COVID-19 and also the 4th August blast in the port of Beirut. These events were seen by many as a crystallisation of Lebanon’s complex problems. However, these episodes do not supplant the rich historical setting both ancient and modern Lebanon represents for urban scholars. Beirut’s cultural and geographical liminality, and enduring role as a prominent urban confluence with multi-faceted geographic positionality, imbue it with an especially abundant empirical interest and topical relevance.
This thematic issue has evolved from activities under the umbrella of the Urban Commission of the International Geographical Union (UGI-IGU), whose 2020 annual conference was supposed to take place in Beirut, Lebanon. It was eventually held as a digital conference, but already offered a first encounter of members of the Commission with a range of researchers from the Middle East, Lebanon and Beirut in particular, and discuss related topics of urban development, policy and research. The special issue offers a chance to shed some new light on Arab and Middle East urbanisms – not with respect to those places that received some attention in recent years (such as Dubai or Doha), but to focus on a place that enjoys both variety and rich history, while being subject to multiple political crises in recent times as well: Beirut, Lebanon.
Currently the Urban Commission of the IGU-UGI plans to hold its 2021 Annual Conference in Beirut as an on-site event, to take place on 23-27 August 2021. Hoping that this will work out, the conference could offer a proper environment for discussing some of the issues that would fit here as well.
Urban Planning (ISSN: 2183-7635) is an international peer-reviewed journal of urban studies aimed at advancing understandings and ideas of humankind’s habitats. Urban Planning is an open access journal (free for readers) with an article processing charge of EUR 900 per accepted manuscript. Please note that a certain budget is preserved for allowing up to seven papers be financed via the editors of this Special Issue.
Keywords:
Mediterranean/Middle East urbanism; Beirut, Lebanon; urban development; urban planning; resilience; urban geo-politics; post-colonial perspectives.
Academic Editors:
Buccianti Bakarat, Liliane, Professor, Université St. Joseph, Département de géographie, Email: liliane.barakat@usj.edu.lb; www.usj.edu.lb
Hesse, Markus, Professor, University of Luxembourg, Dept. of Geography & Spatial Planning, Email: markus.hesse@uni.lu; www.humanities.uni.lu
Timeline:
Submission of Abstracts: 1-15 March 2021
Submission of Full Papers: 15-31 July 2021
Publication of the Issue: January/March 2022
Instructions for Authors:
Authors interested in submitting a paper for this issue are asked to consult the journal's instructions for authors and submit their abstracts (maximum of 250 words, with a tentative title) through the abstracts system (here). When submitting their abstracts, authors are also asked to confirm that they are aware that Urban Planning is an open access journal with a publishing fee if the article is accepted for publication after peer-review (corresponding authors affiliated with our institutional members do not incur this fee). Please also see the above condition for funding.
No comments: