We are pleased to announce that Prof. Dr. Marco Pütz from the Swiss Federal Institute for Forest, Snow and Landscape Research WSL will present his perspectives on current debates on sustainable governance at the Institute for Geography and Spatial Planning, University of Luxembourg. The talk will be followed by an open discussion.
No comments:

Markus and Constance will be presenting this weekend at the annual conference of Spaces & Flows held this year at the University of Amsterdam.  The title of the presentation is,
The Space of Flaws -- On the Contradictions of Integrated Planning in a Fragmented Environment.

An abstract can be found here.
No comments: 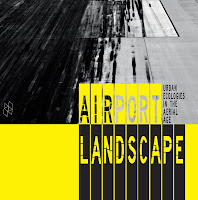 Markus Hesse has been invited to speak at the Harvard Graduate School of Design at the conference and exhibition on Airport Landscape: Urban Ecologies in the Aerial Age, November 15, 2013. His talk is entitled, "The Mental Infrastructures of Airport-Urban Development".  Click  here for the full programme.
No comments:


I am not sure what I should have expected.  Maybe I was expecting a neat little office with books everywhere and stacks of paper, computer screens, and cozy coffee mugs.  Instead, however, I was surrounded by hammering, ladders, lego, boxes, cables, and a rather frantic crew running around getting everything in place. This was the Internationale Bauaustellung (IBA) Basel a week before its opening - in a state of metamorphosis from a planning office to an exhibition.

On October 18th and 19th, IBA team invited the public to view the 43 projects around the region that were designed to inspire a new imaginary for, and bring some strategic functional cohesion to, the cross-border agglomeration of Basel -- a region otherwise divided across 226 Municipalities and three nations. Some impressions of the very well attended event can be found here.

There is much that can be criticized about IBAs as they have spouted up around Germany in recent years, just as Müller and I (Carr) did in Porter and Shaw's Whose Urban Renaissance? Such criticisms question whether IBAs are a crude form of urban marketing, or whether they constitute new forms of post-democratic urban development. Supporters of IBAs should do well not to forget such skepticism; however, the IBA model can also provide some openings in the public planning process that were not possible before.  IBAs can, for example, bring planning out of closed stodgy office buildings and into view, and within earshot, of those affected.  (This is the goal, for example, of the IBA Basel Roadshow.)  IBAs can also act as platforms where the imagination might be activated around questions such as: What can a metropolis look like?  What are the potentials of a given space and how can they be realized? How might the area be planned?  These were obviously urgent questions in and around Basel, where the functional flows of the area clearly indicate that some common cross-border planning and organization is in tall order.

The longer term role of the IBA, however, is less clear.  It is not really clear to anyone what the role an IBA should have with respect to traditional planning, even if normatively speaking, the IBA need only exist in addition to preexisting structures. Any given extra-governmental institution will find its limits, however, in terms of how many planning projects it can manage, and at some point it might be legitimate to raise the question of whether such practices could/should be considered governmental outsourcing. Given the variation in planning cultures across the world, this distinction seems flexible at best. The dizzying list of financiers and partners of the IBA Basel show that 43 projects is already a very impressive portfolio to manage. It leaves one wondering how it will carry forward. This leads to another problem: It is also not clear how commitment and funding from across the region can be secured, or how can co-operation be improved to ensure the appropriate support.  Lastly, for now at least, it is not clear what will happen after IBA has to pack up and close. The objective is clearly to trigger imagination, spark forward-thinking projects, and build lasting infrastructure that will steer development.  Many of these will last longer than the IBA itself, and the memory of IBA as a catalyzer of change will be inscribed. Planning and transformation, are however, not processes with  clear endpoints. Someone will have to carry the torch afterwards.  Who will that be and what will that look like?