Constance Carr & Evan McDonough will present,
Whither sustainability? Governance and regional integration in the Glatt Valley


This paper problematises the concept and practice of integrative planning – one of the central tenants of sustainability. We contend that, in practice, planning for the broader goal of spatial integration has the effect of producing a fundamentally paradoxical and contradictory social space, a form of urbanisation (or suburbanisation) that reinforces some of the problems which sustainability seeks to address. Drawing on an empirical base of observations of transport integration initiatives in the region of the Glatt Valley, and interview work in the field, this paper examines how integrative spatial planning strategies sanction further fragmentation. Observed in the Glatt Valley were attempts to consolidate infrastructure towards optimising capital accumulation along particular axes of flows. Housing, transport, and economic development were three key areas that needed to be integrated for success. The apparent integration of the region, however, is contrasted against a fragmented field of governance, an ambiguous set of winners and losers, and an uncertain trajectory of long-term stability. The research confirms that integrative strategies can entrench and exacerbate existing tendencies of fragmented governance, and in fact, generate new rounds of fragmentation with respect to land use and social worlds.
No comments:

In May, Evan McDonough accompanied me on a research trip to Zurich North, where we attended the conference, "Polyzentrische Stadtregionen": Programm, Adressen, Ort | "Polycentric city regions". After a two full days of great presentations and tours, we finally ended at the airport, where we spent some hours on the public observation deck, and took a public tour of the airport infrastructure. We learned about the various components of the airport's infrastructure, safety mechanisms, maintenance necessities, runway routes, and expansion plans.
We caught a glimpse of the Emirates Airbus A380 taking off, while contemplating the expansion of the Dubai airport:

We were not particularly impressed by the draconian efficiency of placing a deportation jail right on the runway. I wonder what the deportees thought of the airbus...


Zurich Airport, including its contested flight paths and complex surroundings on the periphery of Zurich exhibits a form of urbanisation oriented outwards from the city, one that poses a challenge for global cities such as Zurich that are enmeshed in global flows, exhibit a degree of internal fragmentation. Analysis of the existing Zurich Airport and the infrastructure which connects it to the city suggests that policy aims towards ‘integration’ and ‘mobility’ have the potential to reinforce direction of urbanism in which people and uses are increasingly separated from each other, a trend reinforced by transportation infrastructure. The rise in traffic at the airport - today one of Europe’s major intercontinental hubs with direct flights to 196 cities around the world and over two million passengers per month (Zurich Airport 2014), along with the development of the Glatt Valley outlined in this paper, confirms that although transportation planning towards the goal of metropolitan ‘integration’ is often a contested and paradoxical process, airport areas and nearby business districts can be especially difficult places to achieve sustainable development.

Growing concurrently with Zurich and the city’s emergence as a global financial centre since the 1970s (Diener et al 2006, p. 490), the airport exhibits a clear trajectory of growth, remaining a major European hub despite the collapse of Swissair. Corporate headquarters and IT firms especially have chosen locate here, rather than central Zurich, because of the dual advantage of strategic proximity to the growing airport, as well as availability of land on which to develop (Diener et al. 2006, p. 634), creating what has been described as an ‘airport corridor’ between the airport and central Zurich (Schaafsma, 2009, p. 175). The large, mixed-use area developing in the Glatt Valley engages in a mutually beneficial relationship with the airport, as both the airport and the businesses in the Glatt and the airport itself, are able to boast of their proximity to one another. Glatt municipalities have even renamed themselves Flughafenregion Zürich (Airport Region Zürich) highlighting its business-friendly location.

However, this emphasis on inter-city travel, along with along with the dispersal of urban functions from the city towards the periphery has implications for the sustainable development and governance of Zurich. In addition to the inevitable environmental impacts of such carbon-heavy urbanism, as well as a protracted cross-border dispute with Germany regarding aircraft noise and flights paths (Scholl 2009), this direction of growth calls into question the degree to which transportation enables the social fragmentation of the Zurich periphery, rather than ‘integrating’ the city. Such globally interconnected space is certainly beneficial for the growing business district here, although the question remains: how to substantially connect the surrounding areas and communities to the global ‘flows’ that pass through Zurich and its airport? Scholl (2009) describes how the public urban planning process was employed to reach a preferred realignment of approach paths and runway orientation, yet it remains to be seen what role planning may provide in the reconciling this broader direction of urbanism (and the tendencies of growth for and by the internationalized business community in Zurich) with the needs of the people of Zurich.

This announcement is long overdue, but we were very happy to welcome Evan McDonough to our department this year. Evan joins us after completing a Bachelor in Urban Studies, and Master degree at the Faculty of Environmental Studies, York University in Toronto.  Supervised by Prof. Roger Keil, his Master Thesis was entitled, "Madrid-Barajas Airport and the Urban Geography of Globalisation". He also spent some time studying Montpelier on a student exchanged directed by Prof. Ute Lehrer.

Here, at the Institute of Geography and Spatial Planning, Prof. Markus Hesse welcomes furthering his interests in airport development. The working title of his dissertation is: The Spaces and Scales of Global Flows: International Airports and Globalised Urbanisation. 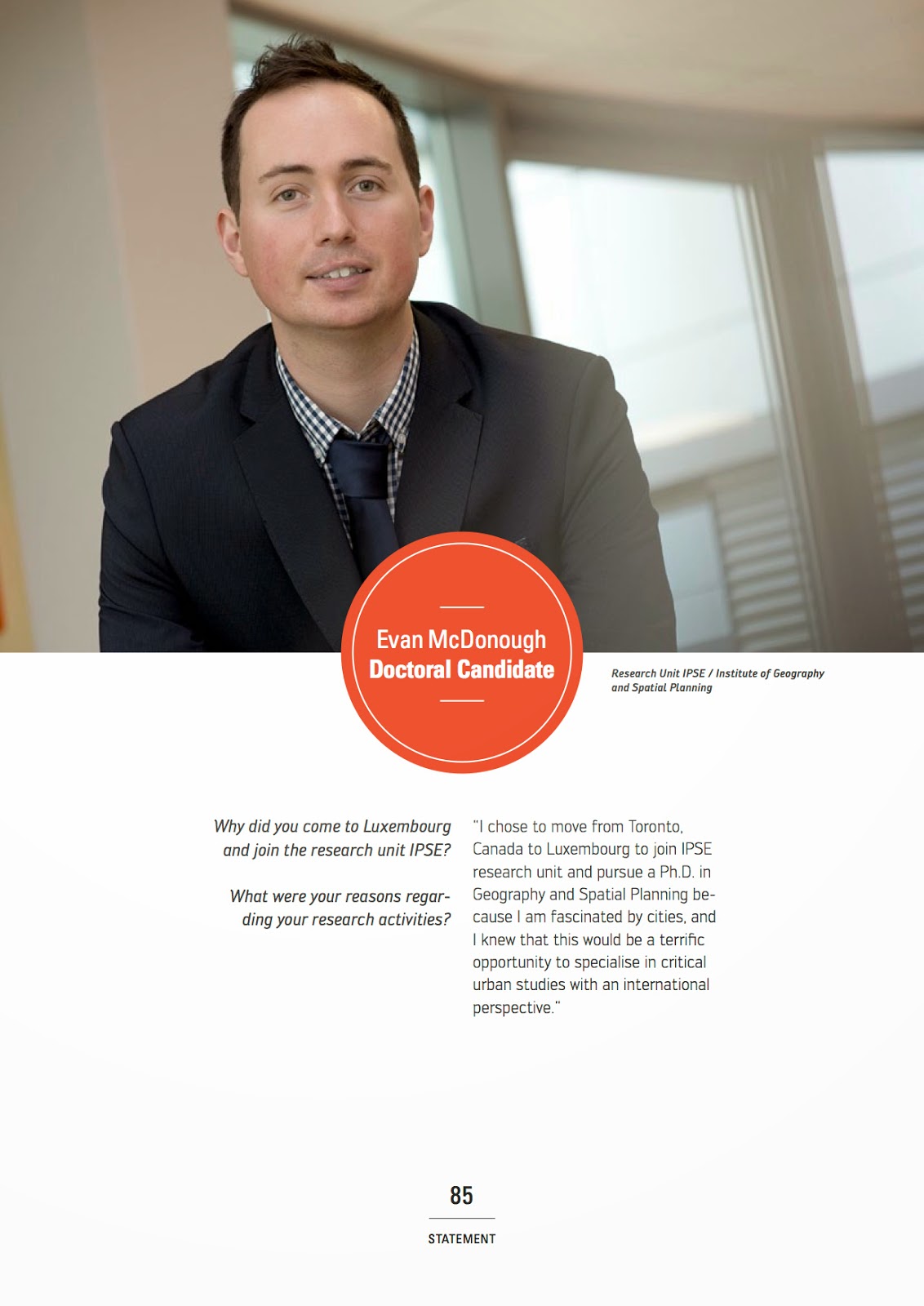 Welcome to Urbanization Unbound, the blogspot of urban geographers at the Institute of Geography and Spatial Planning of the University of Luxembourg, where we like to talk about the spaces and flows that constitute contemporary urban processes. Edited by Constance Carr and Markus Hesse, find here information on conference announcements, new publications, new members of staff, project summaries, upcoming talks, and our latest musings on urban and regional governance, non-market housing, green cities, (sub)urbs, global cities, digital cities, the ramifications of market-led development, urban growth, and much more. Feel free to leave a comment in English, German, French, or Luxembourgish!!
We'd love to keep you in the know and build you into our network. Follow us on twitter (@markus hesse60 and @urban_unbound).