New paper out 'On the discursive construction of metropolitan regions'

This paper explores the background and justification of the process of re-orienting spatial development policies in Germany that ocurred since the 2000s at latest. Two subjects of research are investigated in certain detail: first, it focusses on the ‚New Guidelines for Spatial Development’, which were released in 2006 by the Conference of State and Federal Ministers responsible for Spatial Development in Germany’, particularly Guideline No. 1 ‚Growth and Innovation’; second, the category of Metropolitan Regions, which was introduced since the mid-1990s, is being assessed here. Both subjects and the underlying processes are critically discussed from a discourse analysis perspective. This means that research takes into account the ideological contexts whithin which such issues emerge and are being framed. It is certainly clear that even scientific perspectives on space are by far not independent from individual interpretations. The paper considers both the new guidelines and also the politically designated metropolitan regions as theoretically contradictory, empirically vague and conceptually fragile. Thus, a related claim evolving from our research demands a more pluralistic debate. Moreover, these ideas can also be understood as a contribution to further developing future guidelines for spatial development and thus also the self-conception of spatial policy as such.
No comments:

This post is based on talk given on the occasion of the first "Policy lab" that was organised jointly by CIPU - the National Cell for Information on Urban Policy in Luxembourg and the European Urban Knowledge Network (EUKN), on the 25th July 2013 in Luxembourg-City. The idea behind this intervention was to frame the issue of sustainable urban districts in the wider context of both sustainable development and the associated critical analysis of current building and planning policies (exact order!) in the Grand Duchy. Apologies for bringing this in French, an English version might be available at a later stage. And thanks to Tom Becker for supervising the French edition of the manuscript.
Markus Hesse 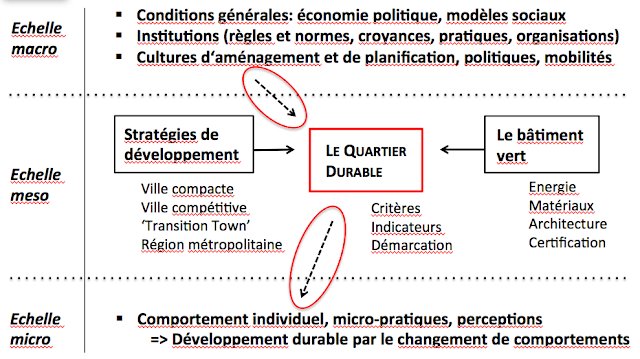 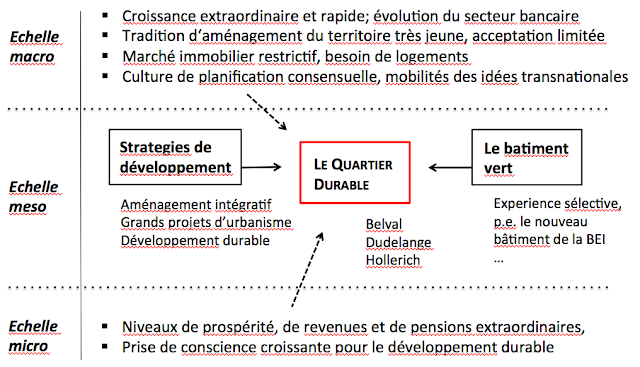 The venue provided an ideal spot to meet up with two (Christian Schmid and Dirk Lohaus) of SUSTAINGOV's four partners, to touch base, to update one another and learn about each others work. Organizationally, it became clear that Hesse and Carr shall organize a meeting in Zurich in the fall. Partners, a doodle will be sent around soon!

At the retreat and during a morning of back-to-back presentations chaired by Richard Milgrom and Roger Keil, Carr presented the results of SUSTAINLUX and the research agenda for SUSTAINGOV. This was followed by Lohaus of IBA Basel who presented the challenges of cross-border integration of Basel (CH), Mulhouse (FR), and Lorrach (DE). Lohaus showed an impressive array of different projects underway that can assist co-operative development across borders. We were all extended an invitation to attend their Congress on Cross Border Planning, this coming October 17th and 18th, 2013. Quickly evident to everyone in the audience were the similarities between the cross-border agglomeration of Luxembourg and that of Basel. Both are cases that challenge prevailing notions of nationally contained metropolitan regions, neatly defined membership, and vertically coordinated and controlled production.

Beyond the immediate relevance to SUSTAINGOV, the conference was also an opportunity to explore other urban worlds -- a necessary on-going education to urban researchers. It is not sufficient to conceive of cities as mere places articulated as isolate on a map, or a container of places where events and processes unfold simply "over there" and disassociated from "here". Rather cities compose each other. They are connected and reinforced through value chains and social political economic networks. Understanding "other" places is thus the same as understanding ourselves.

Quinta de Laje is not much more than a hillside now. When the middle class apartment blocks are built and sold, all memory too of former livelihoods may well enter the realms of forgotten history. Not long ago, however, 350 homes and gardens were standing and growing here. These were recently bulldozed by the City of Lisbon. This is what it used to look like.

This pile of torn mattresses, broken pipes, old wood and furniture, and scrap plastic  was the last stop on a tour through the outskirts of Lisbon. We had already passed through Santa Filomena and Casal da Boba. While the latter seemed a representation of typical post-war social housing (modernist medium rise apartment blocks), the former was a series of unabashed disenfranchisement: homes of corrugated steel shacks with no windows, and no sign of public services -- except for the bulldozer.

None of the neighborhoods benefited from government services. Residents and local activists (voluntary social workers and lawyers) continually fight to demand, for example, garbage collection in their neighborhood. The cynic, which is sometimes difficult to differentiate from the keen eye, might observe this as a strategy of the City to enforce dismal standards in the hopes that the residents leave themselves.

During our tour, some guests were grasping for somehow logical explanations: "Were the residents perhaps illegally squatting, or were they immigrants?" These would be familiar stories - of housing activists fighting for affordable housing, or of immigration activists fighting for revised immigration law. Still, not even these concerns could be pacified: The removed were citizens who had bought the property.
The rationality of such processes, rather, is unveiled by looking at wider political economic processes: Portugal under Troika, and Lisbon as a City expanding through big investment. The land needed to be vacated in the name of so called national interest.

There are reasons why is this relevant to SUSTAINGOV specifically and Luxembourg in general. First, this is a story about participation. This is a cautionary tale of what can happen when local residents and administrations are not respected. Second, this is Europe. All the European strategies and agreements concerning sustainable development and urban development are designed, at least under the pretense, to assist localities across the continent towards development, in enhancing regional specificities, and their capabilities to feedback to EU policy. Portugal is known to for its very effective use of their European funds. Yet, I wonder if the cases of Quinta de Laje are surfacing among the periodic inventories and evaluations of success. There is something going on here. Is there perhaps a link with the fact that 200,000 million Euros  were earned on the conversion of 100,000 Ha of rural land into urban space? (Thanks to Pedro Bingue for that excellent presentation!) Third, Portugal is not so different from Luxembourg: two levels of government (municipal and national), small state characteristics, ideology of private property, and a prevailing understanding that the capital city is the centre of the country ("Portugal é Lisboa e o resto é paisagem", Lisbon is Portugal and the rest is landscape). One major difference is that the Municipalities in Portugal are neither accustomed nor equipped to organize their land resources. This is a right that Municipalities in Luxembourg want to preserve.

Many thanks et bon courage to Prof. Giovanni Allegretti and his energetic team for putting together a fascinating conference introducing us to the complexities of Lisbon and Portugal.
No comments:

A view from the top - l'espace periurbain

The pics below were taken recently (24th June 2013), showing the peri-urban space of the Grand Duchy in the eastern part of the country, a few kilometres east of the capital city.


They reveal two significant features of the country's built environment: one is the neither urban nor rural 'character' - if such thing can be attributed to buildings and 'space' at all. It pretty much reveals what the idea of the urban landscape ('Stadtlandschaft') is about. The other includes most recent buildings -- all multi-storey and probably managed by developers, for urbanites seeking a somehow rural setting for practising their more or less urban lifestyle.
The question will be how to assess all this - the setting, the buildings, the practices - in terms of sustainability. According to a growing body of literature, it became quite clear that an essentialist view of physical space as the main explaining force of human behaviour (and thus of 'compact cities' as the central requirement for achieving sustainability in spatial or urban regards) does not work out. This proposition was fundamentally challenged e.g. by a recent paper from Marcial H.  Echenique, Anthony J. Hargreaves, Gordon Mitchell and Anil Namdeo: Growing cities sustainably. Does urban form really matter?', published in the Journal of the American Planning Association (APA) vol. 78 (2), in Spring 2012.
The interesting thing with this paper is not only that it actually dismantled the compact city-hypothesis, which others such as the late Mike Breheny and colleagues had already been doing a decade earlier; it is also no surprise given geographers' perspectives on contemporary regions being 'unbound', fluid, and difficult to demarcate (see Ash Amin's paper on 'Regions unbound' in the Swedish Geografiska Annaler B, 2004. The most striking issue was that the paper received unusually harsh comments from the planners' community, bemoaning that one (APA) must not publish things that put the common ground of beliefs and traditions of the community into question.
In order to make a productive sense out of this controversy, there are serious questions coming up once studying regions in both conceptual and strategic regards that need to be discussed:
- the question what a 'region' is, and how it can be properly approached in methodological terms. See the very instructive issue of the Regional Studies journal (vol. 47, 1, January 2013) on 'regional worlds';
- the question to what extent this peri-urban setting can be used (and accepted) as a starting point for sustainability, rather than to address the peri-urban with recipes that were taken from the urban realm;
- the question in what way diverging opinions, based on arguments well thought of, can be taken into account, in order to bring an open, constructive and critical debate forward, rather than to determine the style of thought in a top-down manner.
We (the SUSTAIN_GOV project) will tie in with this particular controversy by presenting a paper at this year's 'Spaces & Flows'-Conference, which takes place in the end of November in Amsterdam, on how to deal with spatial fragmentation -- particularly once strategies of spatial integration might no longer be appropriate and effective. 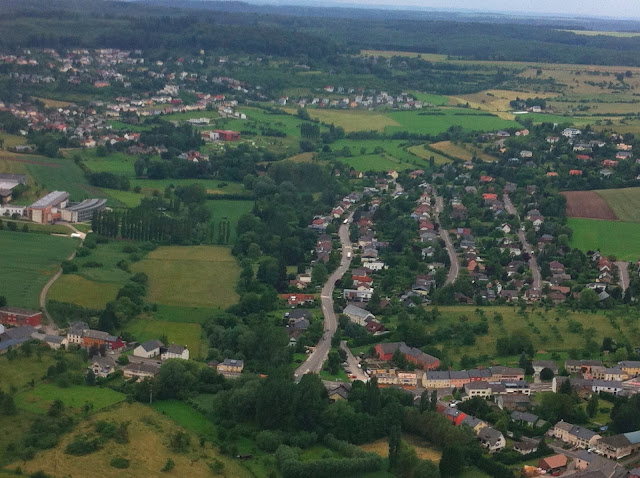 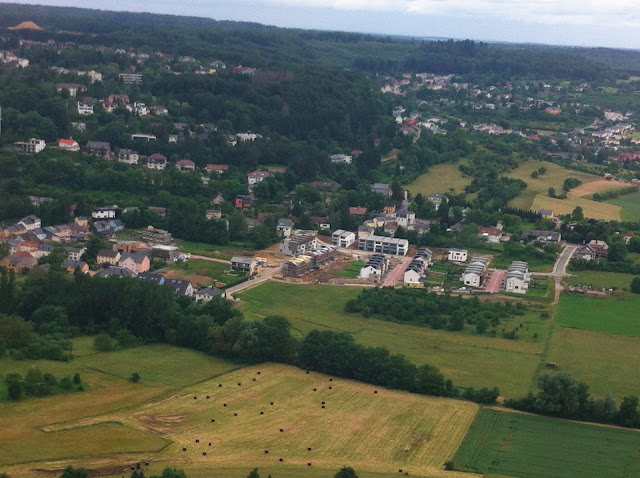