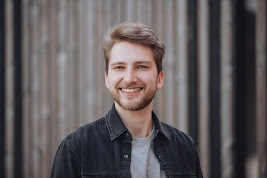 Chris Reiter joins the DIGI-GOV team this April as a new Student assistant during his first year of the Master in Geography and Spatial planning at the University of Luxembourg.
Prior to joining the University of Luxembourg, Chris completed his undergraduate studies in Applied Geography at the University of Trier following a track in human geography with emphasis on spatial planning and development. During his Bachelor studies he interned and worked at a local spatial planning and architecture office in Esch-sur-Alzette (LU) for circa one year before continuing his Master studies.
Chris comes to DIGI-GOV hoping to expand his knowledge on large digital corporations, such as Google or Amazon, and their impact on local, regional decision-making processes as it has been the case in Bissen with the google data center. With him joining his Master’s program and  DIGI-GOV, he seeks to further diversify his skill sets and knowledge and to be part of new team building experiences. His interests include smart cities, digitalization, and housing issues especially in his home country – Luxembourg, where he has lived for most of his life.
As an enthusiast for walks, hikes or just wandering, he spends as much time outside as the weather here in Luxembourg allows for, so you might encounter him one day on one of Luxembourg’s many trails.
No comments: