Save the date for the two final talks on the series on Suburban Transitions:

This Wednesday, we welcome Prof. Axel Priebs from Vienna on the 27th of February at 1PM. His talk is entitled: “Suburban Transition in a City Regional Framework: Practical Insights from Greater Hanover, Germany" in the Black Box, MSH

On March 14th at 1pm, we welcome Dr Guy Engelen (from VITO, Belgium): “Can Urban Sprawl be Halted in Flanders, Belgium? Geo-Research in Support of Spatial Planning Policy” also in the Black Box, MSH.

***
Then in April, the Institute's next series about the Geographies of (in)justice begins, organised in partnership with the JSSJ Justice Spatiale / Spatial Justice Journal.

“Regeneration not speculation” says a billboard in Belfast that we chose for our poster. "Unfair taxation = social anger" says some graffiti in the streets of Paris after a day of “yellow vests” demonstrations. The calls for more justice are flourishing in public space. Yet their diversity and complexity require social scientists to rethink their own conceptualisations of socio-spatial production. This spring, the guest lecture series focuses on the spatial dimension of injustices. It seeks to contribute to the ongoing debate by questioning how injustices are expressed, put into words, constructed as social and political problems, and how researchers develop conceptual and empirical tools to grasp them. The dates are as follows: 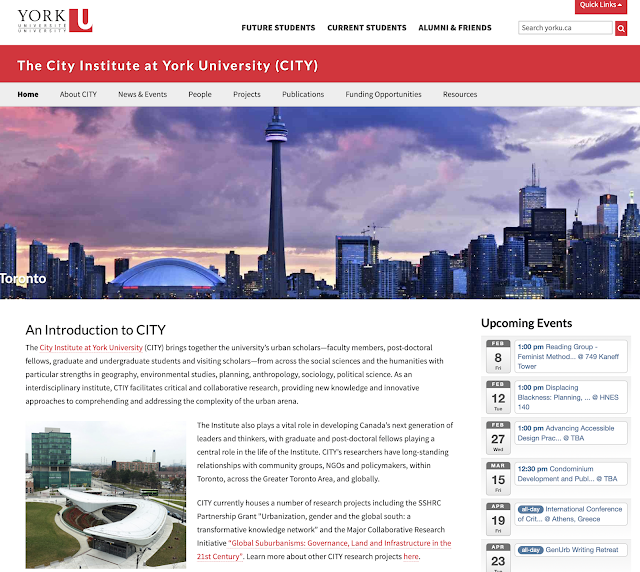 Carr, an Alum of York University's Faculty of Environmental Studies, is super excited to be  joining the scholarly community at the CITY Institute, York U, as a Visiting Scholar (2019) -- an application that was generously supported by CITY members, Professors Gene Desfor, Roger Keil and Linda Peake.

Inspired by constructivist and critical scholarly takes on the digital turn in urban geography, corporatization of urban governance, policy mobility, market-led land-use and sustainability, Carr's goal during her time in Toronto is to research Sidewalk Lab's involvement in urban development along the lakeshore. This topic is generating widespread international attention, and seems to hold a mine field of lessons about smart city development. Exploring this is part of a project that she is pursuing together with Markus Hesse examining the social production and governance of digital cities.

It will be a great opportunity to link urban studies research at CITY to that of the Institute of Geography and Spatial Planning at Uni Luxembourg. In this spirit, Carr also looks forward to joining seminars hosted by CITY, and leading seminars on issues, such as small state governance, cross-border suburban development, critical takes on European sustainable urban development, and/or other topics related to her current or previous work.

We (Carr/Hesse) look forward to presenting our paper, entitled Some notes on smart cities and the corporatization of urban governance at the

Part I Difficulties of Smart Cities
This paper aims to bring forward some interweaving strands of international scholarly literature in urban geography that raise urgent questions concerning the smart city agenda. These are: 1) the digital turn in urban geography (Ash et al. 2016) and the corporatisation of urban governance and algorithmic capitalism (Bilić 2018; Fuchs 2017); and, 2) policy mobility, examining the difficulties of implementing standardized policy solutions as answers to specific urban problems (Baker/Temenos 2015; Carr 2014).
Clearly, digitization and technological developments have revolutionized geography in many ways. And, broadly speaking this is nothing new. Roughly twenty years ago, triggered by the rise of the Internet, speculations forcasted that information and communication technologies would lead to the dissolution of material spaces, leaving little behind but the ‘City of Bits’, as research from the prestigious MIT suggested (Mitchell 1995). However, back then, voices were already pointing at the technological determinism of these early predictions (Graham/Marvin 2002), emphasising the complex relationship between urban development, and recalling that urban planning and technological innovation was neither totally new, nor would this relationship be so trivial that tech itself would necessarily be productive and beneficial to cities.
What has changed in recent times is the proliferation of digital technologies and the diversity of applications. Following Ash et al. (2016), we contend that geography has experienced a ‘digital turn’ with urban geography being produced by, through and of digitization. And, while digitalization has provided benefits, these have also come sidelong a series of unsolved critical evaluations, which remain pertinent to current agendas on smart cities.
First, there are certain epistemologies behind the production of big data, algorithms, digital technology design (Ash et al., 2016): Data is not value-free (Kitchin 2015). Rather, data are indicative of end processes of political ideologies – e.g. neoliberal urban agendas – and associated methods and processes of framing that structure the production of data. If, "we now live in a present characterized by an abundant and diverse array of spatially-enabled digital devices, platforms, applications and services that have become ordinary and expected presences in our everyday lives," (Ash et al. 2016: 28), how are these processes and algorithms informed by socio-economic inequalities and how do these technologies reproduce them? Or, how far does the corporatization of city services resemble ideologies of technological solutionism(Ash et al., 2016)?
Second, the circulation of data around the globe sparks debates as to who owns and regulates the data that gets stored and processed in remote geographic locations. This, too, is not new, but scholars are increasingly wondering about the implications of data-driven markets and algorithmic governance (Bilić, 2018). There remains, “the need to examine the ownership and control of data; the integration of data within urban operating systems, control rooms, and data markets; data security and integrity; data protection and privacy, data quality and provenance and dataveillance,” (Ash et al., 2016).
Third, the smart-cities agenda is being heavily pushed by companies who view digitizing urban environments as a burgeoning market for their products (Kitchin 2015). This could have a number of undesirable externalities: a) the commodification of public services, as city services are administered for private profit; b) technological lock-in effects that may render the city less resilient against bugs, viruses, crashes, and hacks; and, (c) processes of standardization that overlook specificities of places, and fixes municipal administrations to narrowly defined technocratic modes. Are we aware of these downsides? Can we manage their outcomes?
Another set of relevant literatures is that on policy mobility, that focuses not specifically on the digitization of cities, but the circulation of policies. Developed as a critique of new urbanism, or business improvement districts, the central point is that urban policies are not one-size-fits-all templates that can simply be transferred from one place to another: local context and specific historical trajectories matter. This is an important message perhaps to technologists who develop their products in and for one context and then attempt to export or sell them elsewhere. It is also relevant to Luxembourg, where the specificities are rather evident.

Part II Alphabet City
In 2017, Waterfront Toronto, a public entity in charge of managing land-use along Toronto's lakeside, announced that Sidewalk Labs – a subsidiary of Alphabet Inc.(formerly known as Google) – won the international competition to develop Quayside, a derelict piece of land wedged between Lake Ontario and an expressway. This generated a worldwide media storm, announcing that Google was getting into urban development, and rightly so. After all, why would a company that runs an annual revenue of roughly USD110 billion (Alphabet, 2017) based on “algorithm capitalism” (Fuchs 2017) get into urban development?
The exact plan remains unveiled; however, Sidewalk maintains that it will develop Quayside into the best smart city ever, learning from past urban planning projects, and building improvements into the design. Quayside will be environmental with climate positive passive buildings, which will be flexible and multi-purpose. Garbage will be automatically removed, smart cars will ferry people about, and sensors will monitor air pollution. Quayside will also be social: Development will be participatory and to this end, Sidewalk has already engaged a series of Public Roundtables, Neighbourhood Meetings, Workshops, Design Jams, Kids Camps and more. Inhabitants will also profit from a system that integrates health services. Quayside claims also to aid in the economic development of Toronto, by reducing the costs of government and ensuring affordable housing (reversing the trend of gentrification otherwise sweeping the city).
These pillars of sustainability will be delivered by Sidewalk’s “single digital platform” that is widely advertised but hardly explained. Certain is only that this will be a powerful data collection machine, and that the undefined governance of this data is raising red flags, displayed by several significant resignations from Waterfront Toronto and local activism (Bliss 2018; Lorinc 2018). In the light of the scholarly literature above, there is good reason for caution concerning Alphabet's promises and phantasies. Hence, our critical stance on this case.

Part III Lessons for Luxembourg?
What can Sidewalk Labs at Toronto Quayside teach scholars and local Luxembourgish policy-makers?
First, Quayside brings into focus that Alphabet Inc.is entering urban policy as another developer on the field: It is getting territorial. (See also Amazon.com’ssearch for HQ2). In this respect, logics of market-driven land use remain unchanged. However, gaps in discourse at Quayside concerning data governance suggest hidden dimensions to this process, and perhaps even a new dimension in the digital turn: geographies forthe digital, and not the other way around. Second, as Kitchin (2015) said, smart city agendas entail the international circulation of knowledge followed by the application of standardized instruments that mismatch the specificity of place. The lessons of policy mobility are relevant, especially for the rather specific context of Luxembourg.
So, we suggest that we identify the real urban problems in this country, and consider whose problems the smart-city agenda is responding to: We seek to avoid discussing a product beforeclarifying whether there is proper need. In a nutshell, based on a decade of our empirical research, the urban problems of this country are: extreme economic and population growth pressure, associated imbalances of jobs and housing (especially a lack of affordable housing), increasing transport congestion, and limited governance capacities to steer these phenomena. Most importantly, the political majority in Luxembourg believes that growth should continue. Contradictions and externalities of growth are viewed as problems of second order, and simply in need of technical fixes. Growth is almost sacrosanct and must not be criticised, even in future discourses (e.g. Rifkin). Given the absence of openurban debates in Luxembourg, the question is what benefits of smart cities bring beyond opening up new fields of tech engagement and business? We maintain that it would be beneficial to begin with an open discussion about cities first and smartness second. After developing a critical awareness of Luxembourg local development, one could then explore the nexus of cities and smartness, how the two could be brought to productive conversation, what the cost and benefits of implementation and experimentation would be. Smartness, itself, cannot guarantee better urban life.