From Greasy Spoon to Hipster Diner

Sitting at the George Street Diner for the first time in over 20 years was quite a shock. The old layout of the restaurant was preserved, but now it has a fresh coat of paint (inside and out), a new kitchen complete with a flashy splash behind the new fryer, and new upholstery in the booths. There is friendly and outgoing staff, new music humming over blue tooth, vegetarian burritos on for offer, art for sale hanging on the walls, and 20-somethings everywhere. "Good thing we decided to meet on a Tuesday," Prof. Ahmed Allahwala (Human Geography, University of Toronto) tells me, "because on the weekends there would be line-ups to get in." This happy jazzy joint, an obvious magnet in this boomtown, was quite the contrast to my memories of the place, where cigarettes, instant coffee, white toast and ketchup, canned beans, old homeless men, addicts, the dingy colours of yellow and brown and long silences prevail.

The changes in the George Street Diner are kind of indicative of change in the whole neighbourhood. The eatery used to be called a greasy spoon (i.e. a place whose food and service was dubious at best, but where judgement was withheld), and was surrounded by homeless shelters, soup kitchens, second hand flea markets (not "antique markets"), substandard housing, parking lots -- lots of parking lots -- pawn shops, strip clubs, and mostly dark empty streets. Nowadays, Toronto's downtown east and the rapidly integrating waterfront are hip and cool. 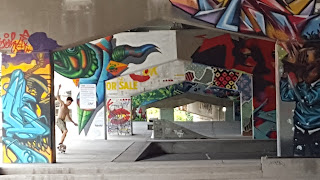 There is much that has been written on the area. Bunce, Desfor and Laidley, Desfor and Keil are obvious starting points here for a deeper analysis into these processes and the interrelations between urban development and politics. My view is somewhat more personal, as this was the neighbourhood where I grew up. What shocked me so much last summer was the change. I knew it was coming. "It's just incredible how many people there are walking around these streets these days," one resident said to me back in 2014.


From the St. Lawrence Market over the Gooderham and Worts Distillery and towards the Don Valley, developments along the northern coast of Lake Ontario boast a new George Brown College for students of Health Sciences, a booming set of film production studios and IT firms, skater parks and galleries, re-naturalized parks, and an ever expanding palate of gastronomic services. Red Path Sugar, still in operation, is also now visible from the lovely new Sugar Beach, where students can watch the arrival of shipments of sugar upfront and close while sun bathing or -- during the longest season as it were -- making snow angels or otherwise mucking about in the slush. There is a latter or a smoothie at every corner, and every coffee table is equipped with a USB port. 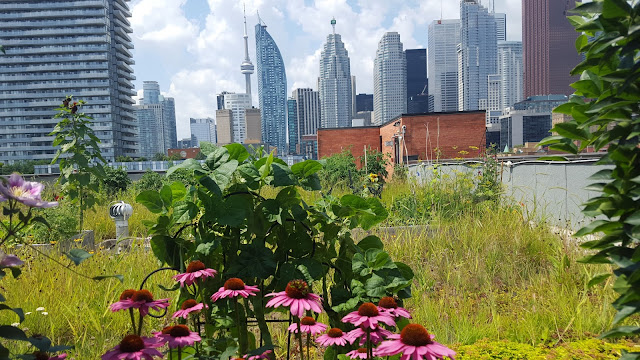 Condominiums are everywhere. Again, condo development in downtown Toronto has not gone unnoticed in the scholarly community.   Amborski, Kerns,  Lehrer et al., or Moos, are good starting points here. High rise condominiums have been shooting out of the earth like wild mushrooms for about 15 year now, apparently keeping pace with the rapid population growth in the city. Condo developers advertise fabulous apartment views -- with those facing southwards towards the lake being the most prized -- dense and therefore "good" urbanity, optimal location to employment, and general lively urban life. Many buildings claim sustainability, waving LEED certification of their green building standards. Not terribly surprising, many apartments are rather pricey (Amborski 2016). Equipped with swimming pools, gyms, and concierges, condos also represent a new style of life – upscale, private high-rise living. Developer led, it is a life popular with singles, couples, elderly, and youth.

While the promise of piece of the sky is clear, there are a variety of issues that still seem a little hazy:

The area is clearly cool now where it wasn't before, and while I am the last one to romanticise the memories of these neighbourhoods - I didn't like eating at the George Street Greasy Spoon or even particularly enjoy being anywhere within a kilometre radius of it (which included my own home, on George St South) -- one might wonder, as Ahmed reminded me: Where are all the homeless people now? Where can one get cheap 2nd hand clothing these days? Is this, in fact, what the neighbourhood was intended to be about all the long?