DKG Kiel, 2019: Housing on the edge: considerations of land and ownership, urbanization, and the possibility of recentering non-market housing 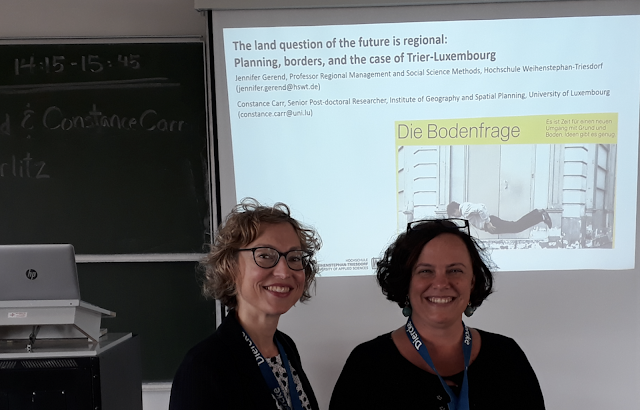 Just over two years ago, Christian Schulz, Gerald Taylor-Aiken and Antje Bruns ignited a series of exchanges to bring the Institute of Geography & Spatial Planning closer together with the Governance and Sustainability Lab at the University of Trier. There, I (Constance Carr) and Jennifer Gerend began talking about the land question. Last week, with support of the AK Geographie und Geschlecht (The Working Group for Geography and Gender), we held a session on "Housing on the edge: considerations of land and ownership, urbanization, and the possibility of recentering non-market housing" at the German Congress for Geography (#DKG2019). Unfortunately, we had two cancellations, but that made way for a short and sweet session with plenty of time for debate afterwards.

Abstract
In recent years, land prices have increased rapidly, in particular in urban agglomerations. Subsequently, the provision of affordable housing by local municipalities and private non-profit organizations has become increasingly difficult. In this context, questions about land policies and land laws are (once again) the focus of public discussions. This paper sets out to investigate current debates about land policies in German-speaking regions and different approaches to the problem of speculation with and scarcity of land. The paper is laid out in three parts. First, I will briefly explore current debates about the relationship between land and housing policies. Second, I will present a variety of (current) land-related regulatory and/or legal frameworks and tools and analyze their respective political orientations and goals. In particular, I will refer to:
– civil society initiatives that try to permanently withdraw land from the speculative market (e.g. the Swiss Edith Maryon foundation, the German Trias Foundation and initiatives to set up non-profit land trusts)
– different land taxation models (e.g. an increased levy on so-called “profits without consideration” or efforts to enact a new real property tax)
– municipal land policies (e.g. so-called cooperative site development models, a focus on allocating land leases instead of selling the land, local municipalities’ use of their right to first refusal)
Third, I will further investigate the potential and applicability of the above-mentioned models and approaches, but also point out their inherent dilemmas and shortcomings.

The land question of the future is regional: Planning, borders, and the case of Trier-Luxembourg
Jennifer Gerend, Constance Carr

Abstract
The land question in geography broadly aims to expose issues of ownership, use, and regulation of land, as well as the flow of capital across cityscapes and the socio-political ramifications (Safransky 2018, 500). Yet, it arguably reproduces traditional, territorial limits while the land dynamics warrant a broader look at such boundaries (Paasi 1999). We illustrate the regional dimension to the land question via the case of our Trier-Luxembourg Greater Region. We draw on the literature addressing: 1) regions as contingent trajectories of change that are “becoming” (Paasi & Metzger 2017, 23), or an amalgam of dynamics coming together in time (Allen et al. 1998, 17); 2) the land question, the meanings of land, and social construct of scarcity (Davy, 2012); 3) processes of (sub)urbanization and sociopolitical unevenness (Carr & McDonough, 2016). Here, strategies on both sides of the border attempt to counter the effects of the regional land dynamics driven by economic growth strategies in Luxembourg, such as the finance sector. Still, further fragmentation prevails. In Luxembourg, skyrocketing land values reinforce cross-border regionalization, even despite public debates, a wealth of planning instruments, and local initiatives to mitigate housing problems. In Germany, federal building law and a state land database in Rhineland Palatinate aim to counter rural land consumption and encourage infill development on buildable lots within existing urban areas. These and other efforts amount to a territorially bounded, regional land “tinkering” (Storper 2014) deficient of a more wholistic consideration of the region.