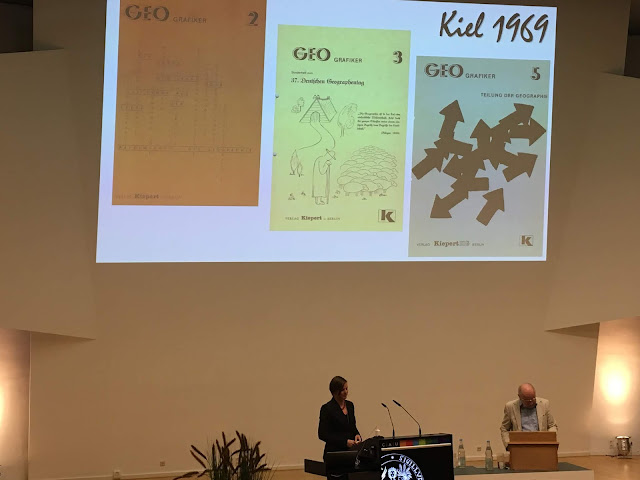 During the last week of September 2019, the German Congress for Geography (DKG) took place at Christian-Albrechts-University (CAU) of Kiel, Germany, organized on behalf of the German Society of Geography and the Geographical Institute of the CAU. The leitmotif of the Conference, which had about 2,000 registered participants coming from the human, physical, didactical and whatsoever specialized streams of the discipline, was “Changes and new beginnings – Geography of the future”. 50 years after the eventful 1969 Kiel “Geographentag“ (as the format was once called), the community of geographers went there again, discussing how the discipline has changed since then and what the contemporary challenges for research, practice and education are about.

It was not necessarily the 50th anniversary as such that made this an important timeline but the myth that is yet surrounding “Kiel 1969”. On that precise occasion, the German part of the discipline had its coming out in the course of the 1967/68 revolts against the establishment, conservatives, authoritarian thoughts and practices. The main claim of the then young generation of assistants and students (profs are not known to having played a major role then) was that geography should get out of the narrow mainstream of descriptive “Länderkunde” (regional geography), and seek for new frontiers in both theoretical and applied, if not political regards. If there has ever been a particular sense of “critical”-ness in the country’s disciplinary formation, it was obviously coming into being exactly then.

While there is no space here to get into the details of this controversy and how its outcomes and consequences are being judged 50 years after, there is also no need to do so. There are some excellent papers provided on the whole subject matter, regarding both its historical and contemporary meanings, which were published recently in the prestigious Geographische Zeitschrift (GZ). They are available online and open access here. A thorough reconstruction of post WWII-(West) German geography debates and developments in English can be found here. Of course, Kiel 1969 was prominently placed on the DKG’s Agenda, for example in a brilliant keynote conversation among two geographers, one young woman (Carolin Schurr, Berne University, Switzerland), and one emeritus (Peter Weichhart, University of Vienna, Austria). They talked about the outcomes and legacy of Kiel 1969, about today’s state of the discipline, and what the commonalities, differences and contradictions between a modern, post-structuralist and feminist take of geography on the one hand, and a more classical understanding of geography – even though pretty well reflected and theoretically informed – on the other hand could be.

The open question addressed in this conversation, which alone made the trip to Northern Germany worth undertaking, was the search for a conceptual if not theoretical centre of the discipline, and whether such a centre can possibly exist at all. Bakery products such as cruller (Krapfen), pretzel and donut were used as related imaginaries, with the donut eventually indicating the yet empty centre of geography. The debate, which actually took place in the absence of attendees of Kiel 1969 and thus rested on related memories rather than contemporary witnesses’ reports, was continued in a panel that discussed also more internal ramifications for the discipline. While Kiel 1969 apparently marked an era for new world views, approaches and methodologies to emerge and to be practiced by geographers, the hierarchical patterns within the discipline itself remained almost unchanged. Some argued that this would still be the case nowadays, also regardless of the age of today’s younger generation ordinarii.

Further consequences from Kiel 1969, such as for the sub-discipline called applied geography, were discussed as well. In this particular context, the debate about the role of geography as an academic discipline in society was especially inspiring. I was lucky to be part of a session that aimed at bringing applied and ‘critical’ geographies together, seeking some common ground of these two strands which are not only distinct and remote fields of engagement, but sub-communities with own journals, networks and habits. The question addressed to the applied colleagues was how to provide impact without being positivistic, which the organized applied geography community is sometimes held suspicious of, at least implicitly. On the contrary, those who label themselves as being critical are not only asked to concede that the rest of the discipline pursues critical engagement as well, but to situate themselves at the interface of research and practice, science and policy in a way that allows making a real impact (likewise, this certainly applies to the whole community …). The science-policy interface seems to become highly relevant and delicate in most general terms, as increasing parts of society expect certain political and practical impact resulting from academic contributions, not only on Fridays – while others wish to see exactly the opposite: the neutral search for truth and objectivity that may not disturb the political battles and monopolies. Hopefully, there will be a journal issue evolving from this truly inspiring debate in the foreseeable future.

The sheer number and variety of different topics, keynotes and sessions presented at the 2019 DKG was a real purchase for attendees, since it revealed that the discipline is actually in good shape. This also contradicts the usual complaint about geography in decline, for example as a subject taught in school classes. This is indeed dangerous for the discipline as a whole, given that academic geography once started in the late 19th century for the purpose of educating school teachers. So geographers’ associations call for urgent action in this regard, for very good reason. Nevertheless, while the large number of parallel sessions doesn’t permit making too general judgements on the conference’s outcome, I had a chance to attend and listen to a variety of excellent sessions with highly inspiring papers. To the positive side of a huge conference, you can easily inform yourself about developments in neighbour strands of your usual research interest as well. This tends to happen not too often, which is also a result of the latent pressure on academics to specialize. My participation in sessions on developmental geography, political ecology, geopolitics or responsibility in science and research was actually more than worth a try.

The nice campus venue and the perfect organization by very many colleagues and students involved made the 2019 DKG rather enjoyable. Also, the Audimax of the CAU provided a ‘central place’ in the very material sense of the term (at least in this respect, the donut was filled very well …). The venue offered plenty of opportunity to meet with colleagues whom you’re otherwise not used to run into. Hence my overall impression is that this was definitely one of the better geo-congresses I participated in, and the sample for comparison is quite large since I attended a “Geographentag” for the very first time (which was in Münster, 1983, at my own Alma Mater). So, well done colleagues, geography move on.